We offer circus skills workshops and shows for all types of public and private events across Kent. 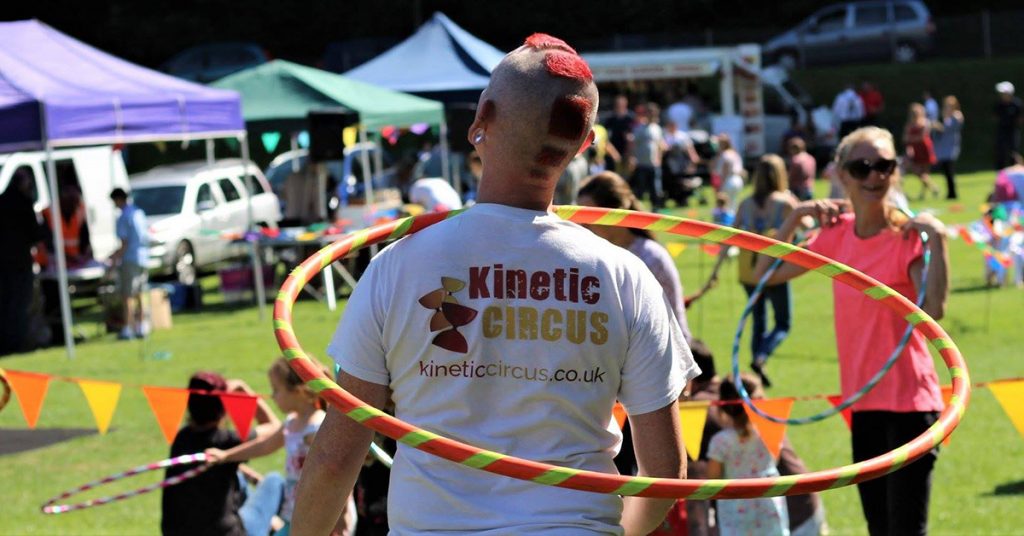 “I love what I do, it’s my hobby, career and passion. I’m always at my happiest when I’m throwing and catching things and want to share that with as many people as possible!

Watching someone learn, develop and grow with an idea is the most rewarding thing in the world and to be able to facilitate that is a genuine privilege.”

Kinetic Circus is owned and run by Paul Incredible. Paul learnt to juggle in 1995 when he was fourteen and started working for local circus company The Kent Circus School two years later.  He has been performing and teaching circus skills ever since.

He worked for the Kent Circus School, entertaining and teaching children and adults for five years. Then in 2003 Paul became a joint director of the company and ran it for seven years, before moving on to set up his own company, Kinetic Circus in 2010. Paul is currently the resident circus teacher at The Kings School Canterbury.

Paul is a experienced and exciting circus entertainer and magician; he adopted the stage name Paul Incredible in 2010 and has since performed all over the country. He is one of the country’s best diabolists, and his specialities include crystal ball manipulation and close up magic. You can see him in action on his performance site: www.paulincredible.com.

Paul is an inspiring and gifted teacher who over his career has taught generations of people how to throw and catch things really, really well.

One of Paul’s specialities is working with children with additional needs and so Kinetic Circus offers bespoke tailored packages to suit a range of different needs and abilities. He spent two years as the juggling instructor with Cirque Nova, a company who specialised in giving people with disabilities and mental health issues access to professional circus equipment and tuition. Paul continues to work with the visually and hearing impaired, clients with autism and children with behavioural issues excluded from school.

Paul lives in Kent with his wife and two children and many cats.

We use cookies on our website to give you the most relevant experience by remembering your preferences and repeat visits. By clicking “Accept All”, you consent to the use of ALL the cookies. However, you may visit "Cookie Settings" to provide a controlled consent.
Cookie SettingsAccept All
Manage consent

This website uses cookies to improve your experience while you navigate through the website. Out of these, the cookies that are categorized as necessary are stored on your browser as they are essential for the working of basic functionalities of the website. We also use third-party cookies that help us analyze and understand how you use this website. These cookies will be stored in your browser only with your consent. You also have the option to opt-out of these cookies. But opting out of some of these cookies may affect your browsing experience.
Necessary Always Enabled
Necessary cookies are absolutely essential for the website to function properly. These cookies ensure basic functionalities and security features of the website, anonymously.
Functional
Functional cookies help to perform certain functionalities like sharing the content of the website on social media platforms, collect feedbacks, and other third-party features.
Performance
Performance cookies are used to understand and analyze the key performance indexes of the website which helps in delivering a better user experience for the visitors.
Analytics
Analytical cookies are used to understand how visitors interact with the website. These cookies help provide information on metrics the number of visitors, bounce rate, traffic source, etc.
Advertisement
Advertisement cookies are used to provide visitors with relevant ads and marketing campaigns. These cookies track visitors across websites and collect information to provide customized ads.
Others
Other uncategorized cookies are those that are being analyzed and have not been classified into a category as yet.
SAVE & ACCEPT
MENU